We think homeownership is a big part of the American Dream. But is it? REALLY?

America and the world were different in 1931 when James Truslow Adams first scrawled his vision of “the American Dream.”

Indeed, Adams’ sentiment was more idealistic than materialistic. It wasn’t until post-WWII that the American Dream of a rich life full of opportunities included a house.

To be fair, Gerald O’Hara did tell Scarlet that “land is the only thing in the world worth workin’ for, worth fightin’ for, worth dyin’ for, because it’s the only thing that lasts.” It’s easy to see how the beliefs of Adams and O’Hara morphed into a McMansion-bubble-bursting-cog of America’s “too big to fail” economy.

Today we travel more, marry later, have fewer kids, and most of us have 10 jobs even before we turned 40. When our phones broke free from walls, we too broke free. Homeownership peaked in 2004 and is now at its lowest point in 21 years.

If you’re wondering if homeownership is right for you right now, here are nine reasons to rent instead of buy — at least for a little longer.

1. You’re too lazy to pick up a finger to help.

If you’d rather chase Pokemon in your back yard than stop mice from entering your house, or if you’d rather watch House than maintain one, you may be too lazy to be a homeowner.

Houses aren’t reliable. If words like “broke,” “leak,” “patch,” “paint,” “fix,” and “repair” seem less like reasons to roll up your sleeves and more like reasons to kick up your feet, owning a home may not be right for you.

2. You couldn’t help even if you wanted to.

As a renter, though, you simply call your landlord to fix the home you don’t own.

3. You’re not sure which direction your life (or relationship, or career) will go.

Even if you aren’t lazy or useless, but you’re surer of who John Snow’s parents are then where you’ll be in one year (let alone five), you might want to rent instead of buy.

Buying a home is expensive. Your agent, the seller’s agent, and Uncle Sam all want their cut. There are fees for home inspection, appraisal, title changes, lender’s origination, and more.

The best means to counterbalance this tab of homeownership is time. But what you if you don’t have the time? Homeownership is a commitment, and it helps to have an idea of where you’re going before you make that commitment.

4. You’re sure as hell things won’t stay the same.

You know those friends who were so much fun and then bought an overpriced home in a cul-de-sac overrun by offspring? You know why they don’t go out anymore? It’s because they’re house poor.

Not only are houses expensive to buy, but they’re also expensive to manicure and maintain. This is why many homeowners become homebodies. If the thought of spending all your free time in your four walls makes you funny, owning a home will be more drama than comedy. 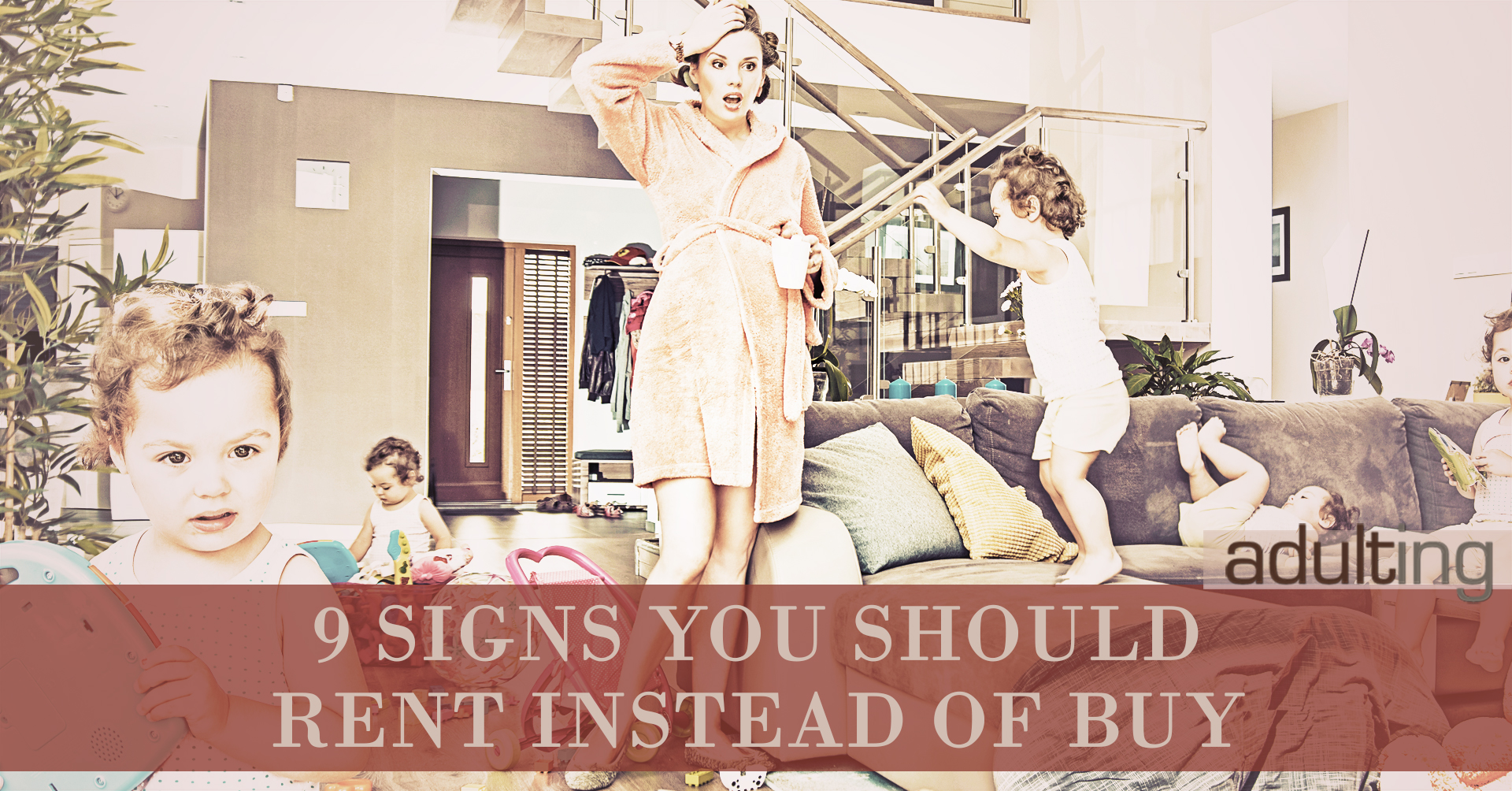 If you and your partner might become the human equivalent of Matryoshka dolls, any home purchase made today could be too small or too large tomorrow.

It’s easy to right-size for your family with rental properties. It’s not that same with purchased properties. Your changing size could mean you need more room to grow sooner than you thought. When the size of your family is firmly settled, it’s time to purchase a permanent settlement.

If homeownership even remotely feels like living on Wisteria Lane in “little boxes made of ticky-tacky,” surrounded by Joanna Eberhart characters, then homeownership may not be right for you.

Unlike college, you can’t move away from co-dependent neighbors every semester. Even when you do escape, someone needs to take care of your house while you’re gone.

Don’t want to be tied down? Buying a home will tie you down in a way renting never could.

Notwithstanding the cost of maintenance, most people shouldn’t buy a house with anything less than 20% down on a fixed rate mortgage.

Sure, there are flexible loans, but they weren’t so flexible in 2008 when balloon payments contributed to problems for many homeowners. You can buy a home with less than 20% down, but with risk-based pricing your lender will likely use will charge you a higher interest rate. You will also have to pay private mortgage insurance.

Don’t forget that discussion we already had about being house poor. You don’t want your home to suck up all your disposable income. Run the numbers. It still might be better for you to rent instead of buy.

Run the numbers. It still might be better for you to rent instead of buy.Click To Tweet

When was the last time someone you knew bought a nest and didn’t remodel it with the conviction of a 1980s teenager BeDazzling a jacket for her first Madonna concert? The problem with home décor bought at Michael’s is that it looks like it.

Home décor not bought at Michaels increases costs too quickly for the less detail-oriented to care. HGTV-inspired remodels increase home values, but not enough to see a 100% return.

That is, the cost of a home sucks all the money out of your bank account. While homes can be good investments, for the average household they bogart most or all investment options. Investment diversification is integral to investment success.

I’m a homeowner. But for three of the nine reasons above I wish I wasn’t. Because my husband and I perfectly timed buying our condo just before the market crashed in 2008, it’s been “amusing.”

If you’re considering buying your own home, it’s a long-term investment and, like Bon Jovi songs, not always a bed of roses.

Listen to this related podcast.

Join other #adults who receive free weekly updates.
For a limited time you’ll receive our new book, The Best Bank Accounts for Adults, when you sign up!
9 Signs to Convince You Renting Is a Better Deal was last modified: January 13th, 2017 by John Schneider
Tweet163
Pin2
Share24
Share
189 Shares

John Schneider is a personal finance writer. His work has appeared in Yahoo Finance, Business Insider, Time, The Christian Science Monitor, Investopedia and others. He writes about money at Debt Free Guys, a site he founded with his husband, David Auten. Along with David, he hosts the Queer Money podcast and YouTube show, on which they talk about the financial nuances of the LGBT community.

View all articles by John Schneider.