Divorce doesn’t have to be a drama-filled ordeal, even if you feel like your heart’s been torn apart.

“Sarene had never married — it was illogical to believe two people could remain compatible for a lifetime …” (Robert Jordan, Lord of Chaos, pg. 489).

Even if you know that your person and you will both change over time, the reality is that you don’t get married expecting a divorce.

Almost no one does. Even if you sign a pre-nup, chances are you don’t really plan to divorce. It’s just a precaution.

Unfortunately, sometimes a divorce is just the way things shake out.

Divorce almost always comes as a surprise — to at least one of the parties.

Even though I had noticed some incompatibilities between my husband and me over the years, it was a shock to me when he asked for a divorce.

I was truly surprised. In fact, even though we’d had some problems over the years, I thought we were working through them better. Things had seemed smooth for a while. Then, one day as we were making plans for some quality time together during the coming week, he just sort of blurted out that he wanted to split.

I felt hurt and betrayed and a number of other emotions. As was natural.

But those feelings didn’t stop me from deciding that it was important to learn how to divorce like an adult — and do it quickly for the sake of our son and our own sanity.

Let it out and let it go.

You don’t have to bottle everything up when you divorce like an adult. I cried every morning for two weeks. One day, I lost it and went on a rage-fueled, profanity-laden tirade at my husband. That was the least adult interaction we had, and he was gracious through it all, letting me get it out and apologizing that his choices put us in this situation. (Our son was nowhere near, which was important.)

After letting it all out that time, I realized that I also had to let go. Let go of the hurt and anger and sadness, and replace it with purpose. It’s not always easy, even two and half years later.

Sometimes I feel angry or upset. There are times I feel a little bitter when I think about what should have been my life. I look at the things I’ve had to accept and do and settle for because of this situation, and I feel angry. But I acknowledge those feelings and let them go.

Besides, I look around and realize that I have a pretty great life right now. It’s not perfect (whose life really is, anyway?), but the bitter feelings well up much less often than they used to. Time has helped. And so has letting go of the feelings after I’ve experienced them.

Being angry doesn’t help anyone, and it holds me back. Plus, it’s not healthy for my son to live with me if I’m negative. Letting go is one of the most important things you can when you are ready to divorce like an adult.

It’s tempting to bring the kids into the situation.

This is a terrible thing to do to the people you love.

Your kids need love and support — and they need to see a united front. Even when you are divorced, you still need to coparent. Just because I was angry at my ex, it doesn’t mean that he’s a bad person. He’s still my son’s father, and they need to have a good relationship.

Unless there is actual abuse involved (and you need to do what it takes to protect them), your children will be better off if you both act like grown-ups and are kind to each other.

My ex and I consult on major purchases related to my son. I’m not buying him a laptop until I discuss it with my ex, and we regularly talk about consequences, and school, and other parenting issues. Staying on the same page keeps the kids from playing you off of one another and helps them see that you can handle the situation like healthy adults.

Your friends aren’t bargaining chips, either.

The same is true of your friends. Don’t make them pick sides.

In the last couple of years since the divorce, my ex and I have done things together with friends. We went to a basketball game with one couple. We also got together with another group of friends for a New Year’s Eve party.

Besides, unless what my ex is doing will affect our son and those visits, it’s none of my business. He’s got his own life, and there’s no reason for me to pry. Especially if it will make things awkward with my friends. 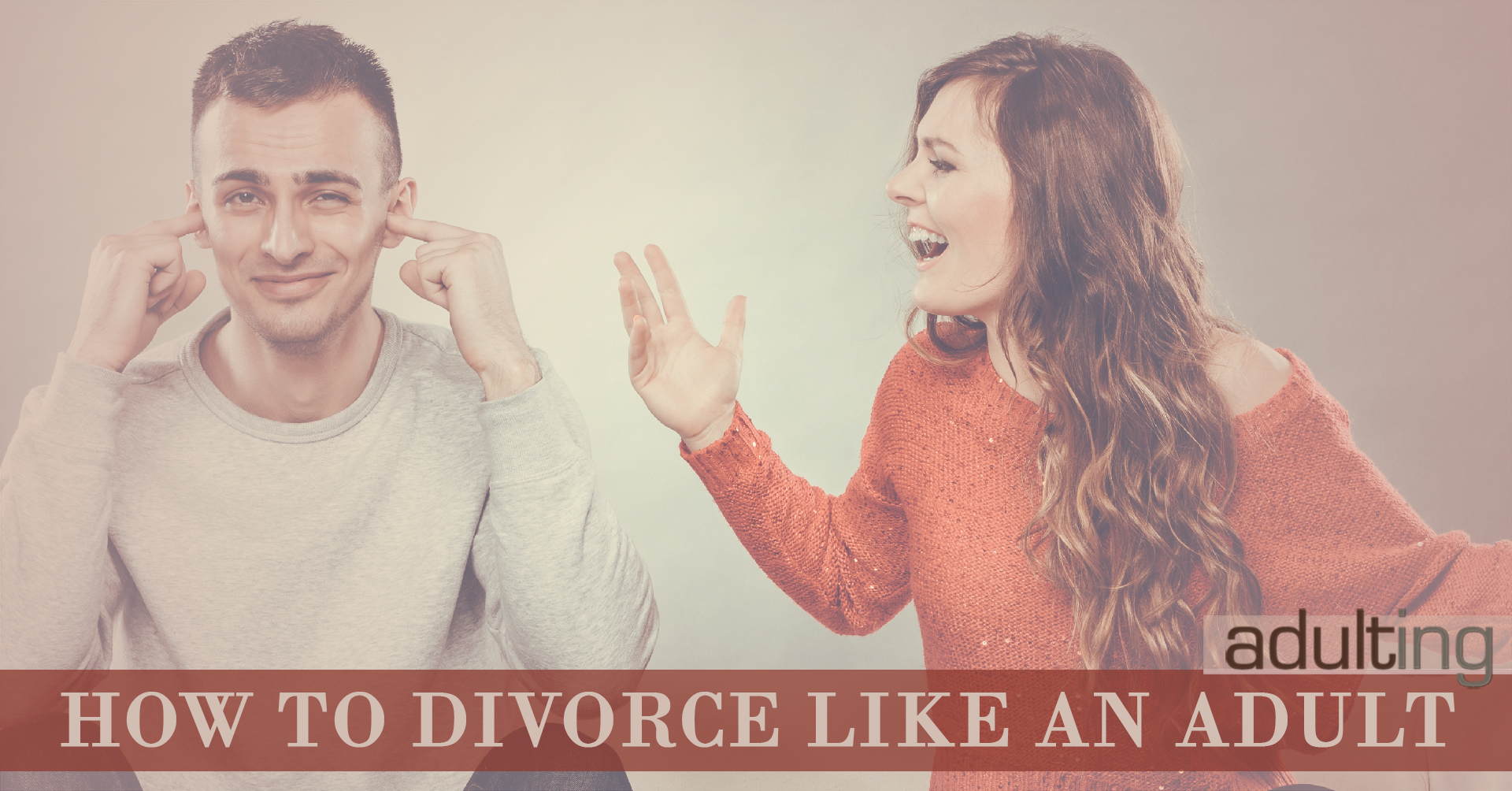 Other than The Incident, my ex and I talked calmly throughout the entire process, even doing our research to figure out how to divorce in the most cost-efficient manner.

It helps that we are both reasonable, grownass adults who aren’t trying to destroy other people’s lives.

We sat down and talked through what would be the best way for us both to get a fresh start. We were calm when talking about the issues, and when one of us started feeling stressed about it, we took a break to regroup.

Dragging it out and trying to “stick it” to the other person doesn’t help anyone. The only people that benefit are the lawyers. We saved money on the divorce by divvying everything up on our own, and acknowledging that we were both working toward the goal of a good start.

Do I sometimes wish that my ex’s desire for divorce didn’t come with the current results? Sure. Am I going to try to ruin his life? Nope.

I’ve got better things to do. Like get on with my own life.

Learning how to divorce like an adult isn’t just about settling it like grownups and moving on. If you don’t have any of the same friends or you don’t have children together, you may never have to see your former S.O. again. And that’s cool if that’s the way you want it.

But I’ve got a child with my ex, and I have relationships with members of his family because we were married for 13½ years. So he’s part of my life. Permanently.

Actually, we’re pretty good friends. We text and talk regularly. Our relationship is the best it’s been in probably three years. The first Christmas after the divorce, when I went to collect my son after holiday time with dad, we got together with his parents and had dinner. Like normal families do. We also enjoyed a pretty kick-ass family vacation (just the three of us) to New York in July.

We’ve spent Christmas together since, and had some solid family time together during summer months. My ex even came and stayed a week with us here in Idaho.

While things are changing a bit as my ex gets involved with dating and I deal with a situationship, we still remain on friendly terms.

In fact, even though I won’t be staying over the summer for as long, we’re still planning a nice family dinner. I’ll be out there for business anyway, and my son is spending most of the summer with his dad, so we’ll all hang out for a day or two.

Divorce doesn’t have to be toxic and drama-filled. We seem to have this idea in society that divorce has to be terrible, and you have to go around trying to ruin each other’s lives.

Or we have this idea that someone is an awful person for asking for a divorce. But that’s not the case. Sometimes it just doesn’t work anymore. And because relationship dynamics are increasingly equal, there’s no reason to stick out a marriage if you’re unhappy.

Divorcing like an adult doesn’t mean that it will be all unicorns and rainbows. There are hard choices to make, and emotions can run high. It’s not fun.

But, at the same time, a divorce also doesn’t have to turn your life into a pit of despair. There are ways for you to approach the situation in a mature manner, and come up with a way to give you both the best potential start in your new lives.

Join other #adults who receive free weekly updates.
For a limited time you’ll receive our new book, The Best Bank Accounts for Adults, when you sign up!
How to Divorce Like an Adult was last modified: March 2nd, 2018 by Miranda Marquit
Tweet73
Pin1
Share127
Share
201 Shares